Paying the Pirate is a short story focusing on two characters from the first story in the Crescent City series, Breathe Me In.

Energy vampire Sabine promises a night of passion to Jude, her pirate blood vampire ex-girlfriend, in exchange for sparing the life of the friend who Jude blames for their breakup. Can Sabine walk away a second time? Will Jude let her?

Book One of the Crescent City Series: 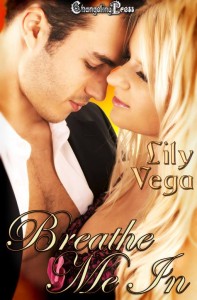 Will John transform Nika into a vampire when he considers the consequences of immortality a curse?

Tired of facing immortality without love, John Rabbitt refuses to consume life energy — until his protege hires a stripper to dance for him.

Veronika Mason never would have agreed to fulfill her strange client’s every desire, but if she doesn’t pay off her ex-boyfriend’s gambling debts, the thug sent to collect the money may well follow through on his violent threats.

Having denied his late wife’s pleas to turn her into an energy vampire, John finds himself guilt-ridden when faced with the same decision again. Given a second chance, will he be able to transform Veronika to save her life? And his own?