So excited to announce that my first #NaughtyElf tale, Naughty, Naughty is now available in A Changeling for All Seasons Box Set. 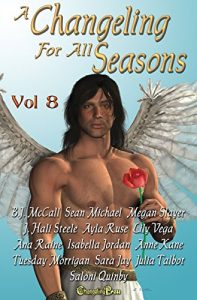 Thirteen tales of Seasonal Magic from your favorite Changeling authors.

Lick This by B.J. McCall: Faith hates peppermint. Can a sexy Elf tempt her to lick a candy cane laced with Christmas magic?

Strange Bedfellows by Julia Talbot: One dentist Elf. Two lumberjacks. A Christmas deadline. Peppermint can’t even cool them off.

Shifter’s Challenge by Megan Slayer: Time to see what magic Christmas has in store for Steve, a black cat shifter, and Landon the Elf

Oh My Deer by Saloni Quinby: Will the sexy reindeer shifter Jake rescued return on Christmas, or disappear forever?

A Reckless Gift by Ayla Ruse: Rec thrives on command. Lacy, chaos. When the two come together, they burn bright as the North Star…

Naughty, Naughty by Lily Vega: Maisy wants Santa’s Elf, Zed, and the special toy he crafted for naughty girls, all to herself.

Bad Elf, No Candy Cane by Sean Michael: Sent to bring Syllabub back to the Pole, Power decides he’d rather play games with the Elf.

Quality Control by Tuesday Morrigan: Maya, head of Quality Control, never expects to be at the mercy of St. Nick’s nephew’s wicked magic.

Xander by Ana Raine: Can Xander and Walter the Elf find their own Christmas magic right here at home?

Puppy Love by Anne Kane: Who can resist a stubborn werewolf with a wicked sense of humor?

Letting Go by Sara Jay: Jack Frost is after the Snow Queen’s heart, and this winter he may just get his Christmas wish.

Wrapped In A Bow by Isabella Jordan: Discipline is tough — even in Santa’s Workshop.

Publisher’s Note: The novellas in A Changeling For All Seasons 8 (Box Set) have been previously published.